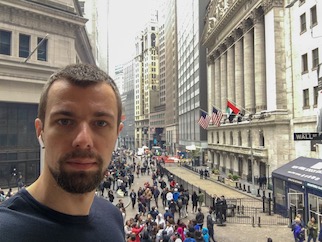 Hey, I’m Markus. I was born in late ’80s in a small country called Estonia which at the time was part of the Soviet Union. Since 2009 I’ve been self-employed in different online projects; I also ran a local limousine rental for several years.

My first exposure to financial markets dates back to 2007 when the world economy was doing great and I got invested in some mutual funds offered by a local bank. The funds were mostly invested in Eastern Europe and Asia. For some reason, and probably by pure luck I sold all the investments in December 2007, just before markets started going south. I wouldn’t call it gut feeling as I wasn’t sure back then what I was actually doing.

After several years of entrepreneurship in IT and transportation, I got interested in the markets again in early 2017. I read few books and slowly started getting exposure in regional ETFs. I also bought some Bitcoin in the midst of 2017 before it went parabolic later that year. I sold all my Bitcoin in December 2017. Though the date seems magically similar to my 2007 decision to go into cash and in hindsight it saved me again from a deep market decline, I’d still call it more of luck than gut feeling.

After Bitcoin started to tank and volatility picked up in the US stock market in early 2018, I knew I had to learn more to survive in the markets. Since then I have read tens of books on finance and psychology, listened to hundreds of hours of podcasts, studied thousands of stock charts, put in lots of hours online reading blogs and articles, attended tens of webinars and a workshop in NYC, met traders from around the world; I’ve been passionate about the US equity market ever since.

My work is based on technical analysis. I am primarily a systematic swing trader by style and the average holding period for such positions is around 1-2 weeks; I also hold some longer term trend-following positions. I do regular weekly homework on the US equity market to keep myself in sync with the market. I use automation to find trading candidates but manually execute trades, managing positions on a daily basis.

I like to trade. I like to write. Trading can be a lonely venture in the retail space. On the other hand it is a selfish business where your win is someone’s loss on the other side of the trade, and you can’t care about his or her situation or purpose for trading. Nevertheless, I’m writing this blog to give back to the community and to connect to other traders. Hope you enjoy!