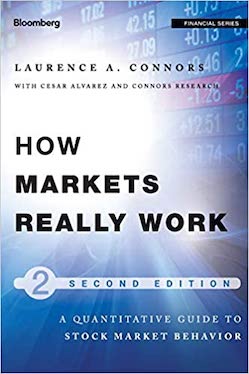 This book was published in 2012. It’s written by Laurence A. Connors and co-authored by Cesar Alvarez who seems to be behind the technology and testing of quant strategies. It is second edition. The first edition was published in 2004.

It starts with an excerpt from their first edition written in 2003 about market edges. Their main idea there was that Wall Street had aged beliefs about the market being strong into the future after good news and several up days. Based on tests the authors claimed that buying short-term weakness had outperformed buying short-term strength in the 1989 – 2003 period.

So what had changed by 2011 when the second edition was being written?

Eight years later the authors claim to be seeing the exact same patterns. In that view, oversold markets tend to rise more in the following few days and overbought markets tend to fall more in the following few days. Don’t take it for granted, it’s not a rule on its own. On a long-term note (one year), low volatility stocks tend to outperform high volatility stocks and it comes with less risk.

The authors disagree with the general wisdom of changing markets. They say the technology changes but human emotions remain the same, especially in short-term. Fear and greed drive prices in the markets.

In more than two decades (1989 – 2011) the price of $SPX was lower on average a week after the market had made a short-term (10 day) high. What they found was that returns increased when buying short-term (10 day) lows instead of the highs. Overall the market had gained on average 0,03% per day and 0,15% per week in their 22-year test but buying short-term lows outperformed the benchmark. They excluded fees and slippage from all tests. There are other interesting tests and facts from the authors in the book.

The 22-year test continued with a bit longer look in the markets. One week after three or more consecutive up days the market lost money on average compared to the benchmark. Buying after multiple days of consecutive lower lows outperformed the average daily gain.

Summary of these tests also concludes that buying $SPX after 1-2-3 days of decline outperforms the benchmark a week later on average, but buying 1-2-3 days of strength underperforms.

The research looked at 15-year period in 1996 – 2011 which had both bull and bear markets. These tests were based on a market breadth indicator of advancing and declining issues. The outcome was contrary to general wisdom. Consecutive days of more declining issues gave better performance in short-term than buying after consecutive days of more advancing issues. Buying when the number of advancing issues was greater and $SPX under its daily MA(200) gave significant underperformance.

The general wisdom about trading puts an important role to volume. Their tests showed that volume as an indicator did not give any edge. Even adding an additional trend filter of daily MA(200) did not improve the results for using volume. Conclusion from the authors was that volume is not an important indicator on its own. And again, this test was done only on $SPX and $NDX. I think volume should be put to some context in a trading system.

Large daily price declines (over 1% or 2%) in $SPX and $NDX outperformed large price gains 1 day, 2 days or a week later significantly. Such declines above the daily MA(200) were even more significant. The idea here is that the market tends to snap back often after a big decline.

They again claim to prove the wide assumptions to be wrong. The general view is that the more stocks are making 52-week highs the healthier the market, and the more stocks are making 52-week lows the weaker the market is. Their test included HILO data of 1993 – 2011 for $SPX and 1995 – 2011 for $NDX. The results showed that 1-week, 5-week, 10-week lows of the HILO index outperformed equivalent highs in a 1-week and 2-week periods. The conclusion was buying weakness outperforms buying strength in short-term.

The authors did not find any edge for this widely used indicator in their tests.

Connors and Alvarez see VIX as an indicator to give signals when to enter and exit the market, when to avoid going long. VIX is the fear index that rises when the market declines and falls when the market rallies. Their tests showed it’s better to take contrary signals, meaning going long when VIX is 5% or more above its 10-period MA and locking gains when VIX is 5% or more below its 10-period MA. In my own experience, I’d say this should also be about short-term moves.

Connors and Alvarez see the RSI(2) being the best stand-alone indicator in their current research. Taking short-term signals of extremes from this indicator outperformed the benchmark significantly.

I feel the main trading style of the authors is short-term mean reversion and therefore they present proof about the S&P500 index ($SPX) oscillating between oversold-overbought conditions and not trending as much. While this does make sense, I think it’s a character of the market index in their time perspective but that doesn’t mean individual names will also move like this. Learn your market and understand its price behavior.

I’ve listened to Cesar Alvarez on podcasts and I’d be cautious about his suggestions not to use stops. I understand he has done research and found out that trading his mean reversion strategies stops did more harm than good, but still I have heard most traders say you either use stops or you stop trading.

I like systematic backtests and this book was interesting to me. If you feel mutual I recommend to read the book.