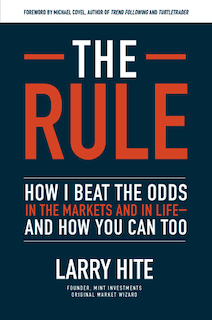 Larry Hite is one of the early pioneers of systematic trend-following trading. He has had great success and was featured in Jack Schwager’s first Market Wizards book in 1989. I have reviewed the Market Wizards series in my blog. Larry has now written a book of his own, how he beats the odds in the markets and in life. The book was published in 2019. I have listened to Hite in several podcasts and he always shares trend-following wisdom that has stood the test of time. He has made hundreds of millions of dollars during his trading career and was running the first hedge fund that had billion dollars of assets under management in 1990.

The introduction already includes much about the author. He’s a dyslexic, half-blind and not an athletic man. Life was not easy for him when he was a kid. But he had ambition and he knew that for winning one had to get into the game. Cutting losers and running on winners has been his rule not only in the markets, but also in life. The main reason one doesn’t get into the game is fear. Most people are afraid to take on challenges. Larry was not like that, he wanted to become a winner.

The author describes his early childhood as desperate, miserable time with the disabilities he had. Larry was bad in school and in sports but he discovered that imagination was his strength, so he started to train his mind. The soon-to-be-80 man writes how there was a failure after failure in his youth and he often thought of suicide. However, he now understands how important failing and accepting it were for his success later. Larry was so used to failing that he didn’t stick to bad things and was always willing to walk away, which could be referred to as “cutting losses short” in trading. Nevertheless, Larry soon realized that he had to know what he needed and what he wanted in life.

To me, it is interesting to read about the early life and thought process of successful traders. The author writes how he first got to know about commodity futures and thought it was a genius idea to place lots of small bets using leverage. In that way, it was not very likely that all the bets would go straight against him. Larry describes his job at a brokerage house as a salesman, which he didn’t like much. He soon went to work for a trader who seemed to be a lot like a trend-follower by nature – going with the direction of price movement and cutting losers when they went against him. Larry started to think more in odds. He quickly realized there were not just good and bad bets, but also winning and losing bets. The first two describe odds and the other two show outcome, which can often be a random event and has nothing to do whether the bet was a good or a bad one.

Hite got serious in trading and managing assets for other people. He raised quite a decent sum of money to trade and was doing pretty well. Most of such stories are not about overnight success and also for Larry there were difficult times where he made some money and then lost it. By betting too big on a single trade, he soon found out the core logic behind risk management. The author starts to get deeper into his trading principles of trend-following. There are some good insights how specific rules were applied to trade commodity futures. Larry has his own interesting view on why taking small wins is not winning.

The author describes his professional career in ’80s, founding the Mint fund and automating his trading ideas to eliminate human emotions from decision-making process. He shares an excerpt of a white paper sent to his partners at the time about asymmetrical leverage and its three ingredients that allowed to offer clients basically risk-free returns by locking in their money for five years. It worked because interest rates were at the highest levels back then, so only a small part of capital was used in riskier trading.

I like the way Larry applies trend-following mindset to other choices in life, like dating and marriage, business and career decisions. But when it comes to investing and trading, the author does not praise his way of doing things like the best method, but tells “buy and hold” (which is basically the opposite way) can work as well, and different styles make up a diversified portfolio.

I have summarized some of the Hite’s story here but actually there is much more in the book to grasp. The lessons he learned after getting almost wiped out when already managing clients’ money are very thoughtful. The author has listed eight reasons why people lose money in the markets, leaving the eighth point to describe his own “almost fatal” experience. Losing teaches a trader to survive in the markets. I recommend to read the book about Larry Hite’s life story to understand how the successes and failures shaped one of the most successful traders of all time.