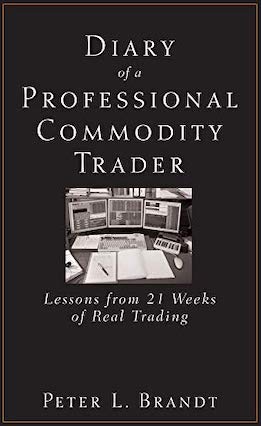 I’ve been following Peter on Twitter for several years. He was also featured in Jack Schwager’s latest book Unknown Market Wizards. The reason I got his book was a recent webinar, where he told that a big difference between traders and investors was income generation vs building wealth, and that got me thinking about my own situation, where I’m trading for a living but also looking at the long-term picture of compounding my assets. Some may notice that the title is about commodities, but that’s not the reason for me to read the book. I’m curious about Peter’s mindset as a trader and I believe there’s no difference in the underlying asset being traded regarding one’s mindset. The book was published in 2011, but Peter’s trading experience starts from the ’70s.

The reality of a market speculator

The author starts the book with introducing his mindset and trading style in commodity and forex markets. It feels like a truly honest and transparent story of a real trader trading the markets with real money. It’s not about a holy grail or milking money from the markets, but describing the life of a market speculator as it actually is. He lays out a road map to the book and what it’s all about. He was writing the script in late 2009 to prepare for 21 weeks of trading the markets for this book without knowing if he’s even going to be profitable. So the content has no benefit of hindsight and is a real deal.

Peter is a discretionary trader and uses classical chart patterns for his decision-making. He points out many mistakes made by novice traders and how to avoid the pitfalls. I think the most important point by Peter has been that trade identification is the least important part in his trading and that risk management is probably the most important followed by psychology. He shares the main risk management rules and thoughts around the topic. Though Peter warns about leverage and volatility in these markets, most of the wisdom shared applies to trading any market, for example stocks. He’s had exceptionally high returns with limited drawdowns. Hitting 60% average annual return for decades with 15% drawdowns on average. What a legend! And it comes with a win rate of only 30%. Putting on a new trade, he knows that he is probably wrong, so his trading is about limiting losses and having big winners that make this business profitable overall.

Taking good care of the losers

Peter describes how he manages risk and trades. He rarely risks more than 1% of equity in a single instrument even if he scales into a trade in parts. He trades mostly breakouts of classical chart patterns in a discretionary way. Even though I have chosen to be a systematic trader myself, I must admit that I like Peter’s approach when it comes to discretionary trading. He trusts horizontal breakout points over diagonal trend lines, keeps a tight stop just below the breakout to get a high payout factor despite the lower win rate. In fact, his historical win rate around 30% is definitely hard to stomach for most people. In the book he shows strategies on charts using trade examples that are interesting and educative to study. These classical chart patterns need a range of weeks to form to become valid. Peter also explains how he manages failed breakouts that obviously occur more often if we think of the low win rate. He seems to be quick to run if a trade is not working. There are definitely some good thoughts about classical price charting and why technical analysis is just a tool to manage trades, not a prediction of the future. A simple and logical way of explaining that a trader can only control what orders he or she places and the market will do what the market will do no matter if the trader decides to buy, sell or do nothing. It’s a psychological aspect of trading that one needs to fully understand and accept to remain sane in this business.

Consistency in trading starts from consistently following a plan

Peter lays out his trading plan about analyzing charts, placing orders and managing open positions. It’s somewhat similar to my own process as he prepares for a new week during the weekend, then consistently follows the plan looking at the charts once a day when the markets are closed. He doesn’t use intraday charts nor does he look at the screens during market hours. The reason is what I’ve understood myself that looking at the screens too often creates unnecessary emotions that can make one deviate from a solid plan.

Everyone can have their own way to trade the markets

The author shows his trades from 2009. It’s interesting to study his 7 H&S pattern trades in gold that year. 5 of them were winners and overall a nice profit thanks to one bigger win. Though there was lots of analysis and decision-making involved and when I checked how my own trend strategy behaved in gold, I saw it was long the whole year in the uptrend for a 25% increase in price. Of course, it looks like a much easier and better way to get the whole long-term move without all the work, but I guess this is where we should think about investing for wealth vs trading for income. I’m a stock trader and I don’t do short-term trades in gold, but Peter traded it for income, managed risk more closely and went for the smaller moves. There’s no right or wrong, but different timeframes and goals in these two examples. Another example is the sugar futures market, where Peter had 11 trades in 2009, 7 of them winners and 4 losers, overall nicely profitable. My own trend strategy would have been long the whole year for a 127% up move had I traded it with my system back then. It just shows that being positioned and doing less in a trending market pays off well, but on the contrary I’m sure Peter’s method does a much better job in a choppy sideways market, where a trend system can take sequent losses. It’s still worth to note how hard his discretionary style actually is as he admits making bad emotional decisions time after time again. It definitely looks easier in a book than in real life trading with real money.

In the third part of the book the author reveals his five-month trading diary from December 2009 through April 2010, describing day-by-day trades and emotions along the way. Studying such chapters about real trading is actually very helpful to understand all the circumstances involved in live trading. Everything may feel logical in theory, but challenges come up that a trader may not be prepared for. Peter didn’t cherry pick the period and wasn’t even sure if he was going to be profitable. He shows the charts of his trades and describes the month-by-month hustle. Part four of the book wraps up the trades and metrics. I won’t comment on it more to leave something for the readers.

Overall, I liked the book and can recommend it especially for discretionary and chart pattern traders. But it doesn’t even matter what the trading style or instruments are, cause the universal principles of trading apply to all kinds of market speculation.