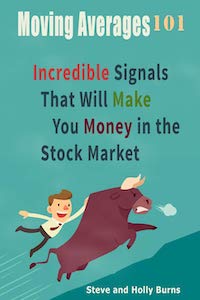 This is a rather short book about moving averages used in combination with RSI and MACD. The authors Holly and Steve Burns published this couple of hours read in 2015. Nevertheless, it is a good overview of key moving averages and how they work. I’ve been following Steve’s work on Twitter for a while now and he has a blog full of good resources meant for beginning traders.

Holly and Steve introduce moving averages and show how to use them. They use primarily 5 day EMA, 10 day EMA, 21 day EMA, 50 day SMA, 100 day SMA and 200 day SMA. It may seem like a lot too many moving averages, but actually there’s a good point why to use a combination of several MAs. A trader should know his or her time frame of charting and the average holding period of a position. Then can he or she decide on which MA’s can be most beneficial. The authors go over each moving average with charts as examples. They describe the best use for each one and warn about weaknesses. One should note that the chart examples used in the book are showing how these strategies work but in real trading there will be false signals, whipsaws, losing trades. Something to consider when starting to apply such indicators.

In my own experience, the shorter moving averages are fast and create more trades but also more false signals and whipsaws. Longer MA’s give less trade frequency but the signals are stronger. For most investors and position traders the 200 day SMA is probably the most important. If you don’t consider using moving averages in your charting, having at least the 200 day SMA as a general market filter to decide on the overall trend can keep you invested in bull markets and in cash (or short) in bear markets.

Besides moving averages the book shows how to maximize possible gains using RSI as an exit indicator. I’m not sure about it myself. It may work with the shorter moving averages when capturing a short term momentum trade because the overbought / oversold indications of RSI work better in trading ranges. When you are capturing a longer term trend, the RSI indications become less meaningful as the overbought state may persist in long uptrends and the oversold state can last in strong downtrends. This means cutting a winning trade short and possibly getting off the trend too early. Everyone needs to test their own method before applying it to real money. Holly and Steve write about moving average crossovers in this book, too. There are some ideas to think of when creating one’s own MA trading system.

I don’t use too many moving averages in my work and I don’t use MA crossovers but I have something similar, just slightly another way of looking at it. I like the idea of moving averages in technical analysis because they are objective, the MA’s are calculated based on prices that one can’t argue with. In comparison to trend lines that in my opinion are subjective because each trader draws them differently. Though it was a quick read I can recommend the book to those traders who want to learn more about using moving averages and crossovers in their technical trading.