I’ve done 35 trades in the US equity market since my post in early March, most have been on for a few days. So how have I done… not too bad but learning. I’ve had wins and losses. I cut my trading account in half after realizing the higher the amounts involved the more emotional my learning curve will be; and invested the other half in passive investments like broad market ETFs and some P2P lending. 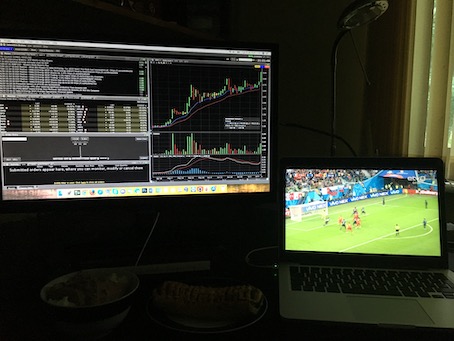 Though the FIFA World Cup is on, I haven’t been paying too much attention to it, more trying to understand technical analysis and trade. This photo illustrates well how to do both 😉 ..not sure how well it works for active trading tho. But it does get your mind off trading for a while which could be beneficial.

I consider myself a discretionary counter-trend trader. It means I do my analysis and rule-based trades manually leaving room to flexibility compared to strictly programmed systems. Counter-trend refers to buying oversold conditions and selling into overbought conditions.

In March when I thought home builders were in favor due to the strong economy I bought XHB and it pretty much fell straight to my STP loss. I had in my memo that the sector was having issues, but I was in such a buying mood that I ignored it. Lesson learned, memos are for a reason. Let a good trade come to you, don’t force it!

I started following Trump on Twitter and tried to catch some intraday swings around the trade war. Pretty tough, I took some loss on the 3x leveraged SPXU and added into my journal: “Lesson learned, trying to guess the market is meaningless.” Damn, I was so sure.. 😉

Should avoid the news more. I was long SPY in April when on one weekend USA fired missiles in Syria. I was pretty sure my long would be destroyed on the Monday opening, tho things settled down by Monday and the day was actually in green. Emotions, emotions.

In May I exited one long position early to avoid losses being sure Trump was going to announce some negative news about the Iran deal. I was wrong again and the position I closed went up to my target. See the chart below where the green arrow marks my buy and the red arrow marks my sell the next day. Scared money is losing money.

In June, the probable moves of trade war were haunting me. It got me quite risk averse and had some fear of pulling the trigger, or if I did pull the trigger I had a fast exit most of the times 🙂

Most of my trades were still in individual names and I had some profits too (got some dividends yay), but overall the past few months have ended in slightly red for me. Paying the tuition fee; therefore it’s good to bet with small sizes.

I often find myself going thru news to find answers to my decisions. I need to understand that there’s noise in the markets, traders react to news differently and in the end it’s the demand / supply that makes market prices. Therefore, going forward I’ll be “reading news” from my charts. Let the price tell me what’s going on.

It’s obviously a different story if your trading system is built around news but I haven’t seen too many pros doing it.

Lesson learned: Trade your system, not the news.