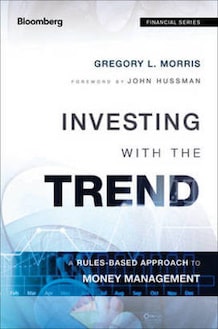 Listening to Greg Morris on podcasts made me pick this book, but also the fact that I’m fond of trading with the trend. I have already read and reviewed the author’s other book “Market Breadth Indicators” published in 2015; this one was published in 2014. The book contains 40 years of market experience with trend following mindset, and technical analysis for longer term perspective. All data and charts included have an ending date of December 31, 2012.

The author lays out some misconceptions in the world of finance and shares his own experience and takeaways:

1. In 1979 – 2012, missing the worst 10 days of S&P 500 index was much more beneficial than being invested at all times in order not to miss the best 10 days. The author has done the same test on Dow Industrial Average back to 1885 and the results are always the same. Being able to avoid the bad times beats buy and hold.

2. Diversification works in bull markets, but in bear markets the only thing going up is correlation.

3. Dollar cost averaging keeps market risk open and is usually for those who don’t know what else to do.

4. Compounding works if annual returns are positive but a larger one-year drawdown can kill the compounding to date.

5. Risk is not volatility, it is drawdown (loss of capital) which for most investors means bear market.

7. Averages are shown as examples on a too long time period that most people don’t have until retirement. There could be 10-15 years of secular bear market that happens to be the major part of one’s investment horizon.

8. Nobody can know what the markets will do in the future, but the prediction business accounts for hundreds of billions of dollars. “You cannot predict, but you can prepare.” (Howard Marks)

9. If someone in the world of finance gets a prediction right, they won’t let you forget it; if they get it wrong nobody remembers it.

10. The financial media is constantly finding some event to justify a price move. In reality, news, events, research etc. don’t move prices, traders do it and everyone has their own motivation.

The hard evidence of price data

The author describes bull and bear markets and brings in some statistics up until 2012 when the book was written. He focuses more on bear markets because this is what matters more in terms of risk management.

The stats for all bear markets of Dow Jones Industrials since 1885 are included. According to this the average duration from market peak to full recovery lasted for 8,5 years. For S&P 500 index since 1927, the same full bear market cycle lasted for 5,5 years on average.

It’s rather interesting how drawdowns of 20% and more have lately been so quick to recover, like the ones seen in December 2018 and March 2020. It definitely skews the modern data. There is educational and interesting content about secular market cycles that for my own work is too long-term but still useful to know about it. However, it seems to be important for buy and hold investors who were more impacted by the market moving almost nowhere in secular bears of 1966 – 1982 and 2000 – 2012.

The second part of the book is about market research. Greg writes about technical analysis, what he thinks about it and how to use it best in his opinion. He is rational about the fact that everyone has their own methods that suit them and there is no single right choice. When comparing predictive analysis to reactive, he is in the latter camp which I also have more belief in.

The author has done a thorough trend analysis on a hundred different global markets to show the character of trends and rank the markets based on the results. He is using 5% and 21-day ZigZag lines in his analysis. My own concept is faster to react and shorter term in nature, but I’m trading with the trend rather than investing. I don’t try to rank markets that trend better in my own work. Robustness of a trend strategy is important in my opinion, which means the same strategy can be applied to S&P 500 index or the gold ETF. Otherwise it could lead to curve-fitting and poor future performance.

The main point of Greg’s analysis here is that markets do trend based on supply and demand; and also that there can be strong uptrends in bear markets. Looking at his drawdown analysis of S&P 500 and Dow Jones indexes since 1920s, it is clear that for buy and hold investors the results depend on the time one was born.

Part three of the book is all about rule-based trend models. Here I understand why it’s called investing with the trend and what the difference is compared to my own trading with the trend. Greg’s charts and indicators look much more longer term than what I do myself. Though the concept and idea behind following a trend is the same, applying it to the markets is different. He introduces several trend indicators but one should keep it simple, pick a few that suit best.

Greg explains his “Dancing with the Trend” methodology and shows performance since its inception in 1996 to 2012. Though he doesn’t like to compare results to a benchmark, his rules-based investing strategy did better than the averages. The fact it did better with much less drawdowns is even more significant. His strategy never had a drawdown over 20% during that period!

The book ends with trend following mindset, why focusing on process over outcome is necessary and what it takes to stay disciplined. Most of the trend following theory in this book was already familiar to me, but this could be a useful read for a buy and hold investor seeking for protection in bear markets. There is much statistical data presented in the book to make the point. I recommend to study it.

Investing with the Trend by Gregory L. Morris book link