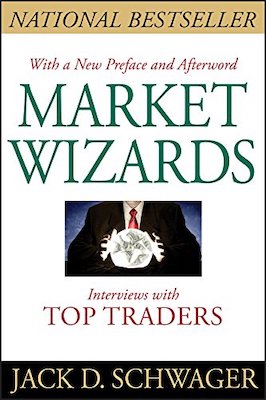 The Market Wizards series from Jack D. Schwager is classics. Out of 100 episodes of trading podcasts I’ve listened to, in half of them these books have been mentioned. Just because of its popularity I guess you need to read them if you want to be serious about trading.

His first book was released in 1989, so though it’s quite old it covers many ever-lasting truths about financial trading. Jack interviews some of the best traders known to public with proven track records. He has put a lot of work into the book and it’s well worth it.

The story I best remember from the book is about Richard Dennis. He is known for his project the Turtle Traders, where he wanted to show his partner Bill Eckhardt that anyone can learn to become a trader. He advertised in the newspaper that he was looking for traders to work for him. There were a thousand people sending applications and he picked some out of the crowd. There were some basic questions about personal behavior he used to decide whether a person had the traits to become a professional trader or not. But all the education and methodology was taught by Dennis and his team. The project turned out to be a success and many of the Turtle Traders are trading today for their own business, one well-known is Jerry Parker, for example.

Though trading in the ’70s – ’80s seems a bit different from now, there were no electronic markets as we know it, less market participants and no algorithmic trading involved, so my personal understanding is that there was a lot less noise in the markets and trends were cleaner to catch and ride on. However, it’s no excuse for today, as opportunities are always well understood in hindsight.

From different market wizards interviewed, same principles are repeated over and over again. Cut losses. Risk management is essential to be in the game. Think more about losing than winning. Use your edge and trade your plan, this means often standing on the sideline.

Definitely a good read to understand better how traders worked back then without computers and the Internet.