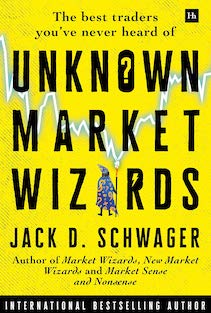 Jack’s Market Wizards series are the most mentioned trading books in the industry. I have read and reviewed his four other books in my blog. I’m excited to write that after 8 years since the last one, the Unknown Market Wizards was published in 2020. As the title goes, this one is about solo traders unknown to the public who have achieved unbelievable consistent returns. I know Jack does a good job interviewing but also validating the results. This book is not about a winning trading strategy but shares knowledge and experience of some of the best individual traders around.

Peter hasn’t been totally unknown in previous years. I have listened to him online and he has a large following on Twitter. He’s been trading since 1976. Peter blew up his first 3-4 accounts. He had success but then stopped trading for 11 years (1995 – 2006). During his total 27 trading years he made 58% average annual return. The main points from his interview are that timeframe is different for everyone, one should use stops to limit losses and find a unique method to trade.

Jason is a contrarian meaning he goes against conventional behavior. Sitting tight has played out better for him than trying to anticipate each daily move. His philosophy is to see what the public agrees on and look for market confirmation to do the opposite. He suggests not to fight the tape and believes human emotions never change.

Richard’s trading returned average annual return of 280% for 6 years with maximum drawdown of only 11%. He tells everyone to keep a journal. Richard’s belief is that trend following with discretion can give better edge that is harder to replicate. Proper mindset is critical for success. He admits that trading doesn’t provide a steady income.

Amrit had average annual return of 337% in a 13-year period. He trades market moving events. His trading style is to hold large sized positions short-term, often intraday only. Amrit waits for the best opportunities. Successful trading is about what you don’t do. You need conviction not hope for a trade. Amrit suggests to document and review your trades.

For 9 years Daljit’s average annual return was 298%. He trades large sized positions. His portfolio had 84% annual volatility due to huge gains. However, the monthly maximum drawdown has been under 20%. Daljit is a macro event trader, using headlines for tactics. Trading is not about being right but about making money. He also suggests to keep a trading journal.

John failed in school but became successful in trading. He uses technical and fundamental analysis with proprietary software automation. John is an event trader. He managed to make 42% average annual return over a 10-year period. The main takeaways from his interview are to stick to your process, not to trade too large, and to use your emotions as a signal to do the opposite.

Jeffrey had turned $2500 into $50M since 2002. He started out day-trading penny stocks and has now transformed into a swing trader. He made 80% per annum for 17 years. Jeffrey first looks at hot sectors, then does physical research on products of the companies that are buying candidates, after which he looks to buy a down trend-line breakout that gives a good risk / reward entry. It often leads to false breakouts and small losses. He never goes short in stocks. He’s had much luck with timing exits.

Chris uses neither technical nor fundamental analysis. Instead, he is observing social trends and keyword mentions. He first failed for years, then made 68% annual return for 14 years. Chris turned $83k to $21M. He tries to make sense of the product or service before investing in it. His advice to traders is to be unique and patient. Pick the method that interests you.

Marsten made 20% average compound annual return for 20 years. He is a systematic trader. Marsten’s advice is to keep a system simple instead of adding rules and re-optimizing. He tells beginning traders not to quit their day job.

Michael runs his trading shop with $8M of assets under management. His approach is best described as long equity investments with short-term event trading, mainly shorting biotech stocks. Michael has been able to keep maximum drawdown under 20%. His annual compound return was 29% for 10 years. His advice to traders is to be persistent, know your edge and build a process around it.

Pavel first lost 80% of his $20k account. Then he researched more, started again with $27k and doubled it in a year. He is a long-only equity trader. Pavel’s 11-year average annual return was 35% with maximum drawdown of only 13%. His account is usually around $50-80k because he’s using profits to pay for living expenses.

The last chapter is a conclusion of all interviews and the mutual traits of these successful traders put into 46 points by the author.

Reading about the successful traders who all do something different in the markets, reminds me how unique everyone can be in trading and still make money. Most of the outstanding returns described have come from discretionary style, which in my opinion can have more luck and survivorship bias involved. These traders have definitely worked hard and earned their success, but for every such example there are thousands of others who tried and failed. It seems to me that discretionary trading can offer bigger opportunities while systematic approach offers more stability in the long run.

I enjoyed the read very much and recommend it to others. Those who have read Jack Schwager’s previous Market Wizards books are probably already eager to get hands on it.