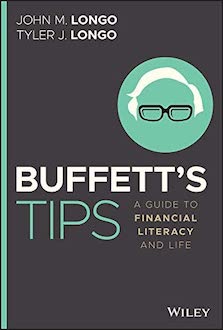 Thank you Äripäev for sending me the Estonian version of this book. Even though I’m not a fan of buy-and-hold investing, it was an interesting read about the 100 tips from one the greatest investors of all time, billionaire Warren Buffett. I’m obviously not going to list all the tips as this is what readers need to find out themselves, but I’ll discuss some of the points that have made me think more about the subject. The book was published in late 2020.

This is one of Buffett’s famous sayings, which I’ve had a hard time to wrap my head around. I think most novice investors think it means that one should buy only good stocks and never sell any for a loss. I might be wrong, but this is how I see it. First, we never know what the price of a stock is going to do in the future, so we may pick a company that looks good but it doesn’t guarantee a win. Secondly, if the stock turns into a loser, not selling it just to avoid losing money is either lack of risk management or a mix of psychological biases that both lead to a poor outcome in the stock market.

Even Buffett has lost and will lose money in the market. So one way to see it is to never lose too much money that it can put you out of the game. Taking a small loss in case a thesis doesn’t work out is a normal part of participating in financial markets.

Hold stocks for the long run and you’ll be golden

This isn’t an exact quote from Buffett, but I often see people thinking that if they also buy some stock and hold it for 50 years, they will become as successful as the billionaire himself. Well, I don’t think Buffett became a billionaire just for holding the stock of Coca-Cola for decades. He is an entrepreneur and has run an insurance business that gave him tax advantages in US, and also allowed investing the insurance premium got from the business that levered up his investments.

Even though the market as a whole has an upside bias in the long run, don’t underestimate Buffett’s diligent research and timing to buy a good company at a fair price. He doesn’t just pick blue chip names randomly to hold them hoping they go up in price. Also, he admits being wrong like we saw in 2020 with his airline holdings.

These are just my thoughts and you may think differently, that’s fine. Warren Buffett is obviously a very successful and smart man and I praise him for everything he has achieved, even though as a trader I don’t agree on everything regarding the markets. There are many good tips in the book not just about investing, but about life in general as well. It’s definitely a good read and a reminder of the billionaire’s philosophy even for the biggest Buffett fans out there.