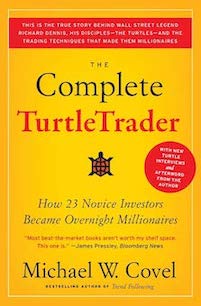 It’s the story of the famous experiment in 1983 about teaching a group of inexperienced people to become traders led by Richard Dennis and his partner William Eckhardt. Dennis believed in teaching someone to become a trader while Eckhardt had serious doubts. They made a bet to give it a try through the experiment and called it the “Turtles” after Dennis had seen how turtles were being grown in Singapore. This fascinating story has also been covered in Jack D. Schwager’s Market Wizards book and in other materials by the author Michael W. Covel. The Complete TurtleTrader was first published in 2007.

How it all started

Richard Dennis had always thought trading to be something that could be learned. He thought about money differently than most people. For Dennis money was just a way of keeping score. His partner William Eckhardt thought one was born either to be a trader or not. The two men decided to put their debate into action and through the training experiment find out about the nature vs nurture aspect. In 1983, C&D Commodities put an advertisement out in the Wall Street Journal and Barron’s stating that anyone could apply to become a trader, no prior experience was necessary and all the proprietary training was going to be provided by the firm. The students were going to trade the firm’s money and be able to keep a part of the profits. For many it seemed a too good opportunity to be true.

There is an interesting chapter about Dennis’s early life: first experience in trading, early success and being the master in trading pits, humble personality, tough times after leaving the floor, getting involved in politics, managing other people’s money and finally getting to the Turtles experiment. It gives a great overview of his life and work. Some thoughtful points from Richard Dennis about luck in trading.

Applying to the experiment

More detailed descriptions about the legendary ad, people who applied, what they had to do in order to get selected, what kind of traits Dennis and Eckhardt were expecting from the applicants. Many of them were shocked to see such an ad in newspapers in the first place. It sounded too good to be true to many and it did change the life of so many people. Some of the true / false questions asked from the applicants are listed in the book and I tried to quickly answer them myself. The right answers aren’t included but hopefully I did good enough. One of the key factors here is why people with outstanding intelligence can be terrible traders.

Training of the Turtles

Dennis taught the Turtles his theory-driven quantitative trading approach – mechanical trend-following based on a set of rules. Some core axioms of the Turtles sound very relevant even today, almost 40 years later; similar to what I have written down myself. Dennis and Eckhardt were very strict about their rules and they had to let some people go, so not everyone made the cut. An eye-opening story how the Turtles were taught to go against basic human nature, the flaws that we may not notice while making decisions but actually hurt our trading performance significantly.

The trading methods and rules

The next chapter is all about the Turtles’ strategies, risk management, position sizing and rules around it. Most of it makes absolute sense. There’s great wisdom between the lines. The author has done good research to describe the people in the Turtles experiment: who they were, what they looked like, how they traded the markets etc.

Termination of the program

In 1988, it all came to an end. Dennis terminated the Turtle program. While the exact reason is unclear, Dennis was having some issues of his own. Many of the Turtles started to trade for clients on their own. There is a whole chapter on Jerry Parker, a successful Turtle who founded Chesapeake Capital and started managing money for clients. But not all Turtles were successful after the program. There were couple of guys from the group who tried to make easy money by selling Dennis’s rules. They also tried to trade on their own but failed to repeat the process that they had under Dennis. A second-generation Turtle Salem Abraham got inspired by meeting and talking to Jerry Parker, the original Turtle. Abraham’s story is inspiring in itself.

It is a fascinating story to me. I have read about the traders featured in this book and listened to them on podcasts. So I was already aware of much of the content but there was still so much new, too. The moral of the story is that trading can be learned and you don’t need to be born with special skills. However, people with entrepreneurial mindset and toughness to take losses and get back up, were the ones to continue on the success path when trading without a mentor. If you like the review, I recommend to read the whole book. There is a lot more described and details that make a difference how a reader will gain the insights and inspiration.