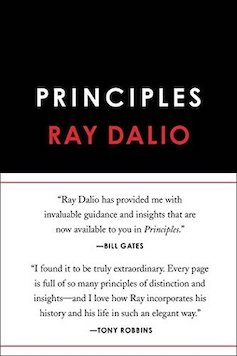 I saw this piece of writing on a bookshelf and decided to give it a read. It’s not an investing book per se but a story of life and work principles written by one of the most successful hedge fund managers, billionaire Ray Dalio. Dalio writes about the principles he developed while running Bridgewater Associates. The book was published in 2017.

Quite at the beginning of this book something caught my attention. Dalio writes about his first trades in the stock market in 1960s when he was afraid of being average more than failure. I’ve thought about passive index investing that so many promote like a sure way to become average. Well, I couldn’t imagine waking up and telling myself in the mirror to be average. Not my thing either.

It’s interesting to read how Dalio describes the 1979 – 1981 period as even worse for US economy than the 2008 financial crisis. He was totally wrong at the time when he publicly predicted a deep recession was coming that didn’t happen. He admits being arrogant and has learned a lot from it. It illustrates well how nobody can predict the future, and even though all indicators were signaling a downturn, the FED stepped in and saved it again causing the markets to rally.

I had the impression that Dalio was a rule-based fundamental investor, but I didn’t know that he actually turned into a quant in the 1980s when applying computers to backtest and develop automated trading systems. His principles about automation, backtesting and probabilities are very similar to what I do myself as a systematic trader.

The chapter about giving back to people who need it the most has some interesting thoughts about philanthropy. Dalio’s family has done much good to the society and it’s great to see how he has raised his children with that kind of mindset.

Dalio describes that satisfaction of success doesn’t come from reaching goals but instead from trying hard. He made me think about my own perspectives with the idea that after people reach their goals and dreams they tend to be happy for just a while and then need something new. Life is an ongoing process of new challenges and even the most successful people don’t feel as special themselves as other people see them according to Ray’s thoughts.

I very much like the part of life principles where Ray writes about the conscious vs subconscious mind, habits, different personalities and how it all affects us daily. I noticed how the author described meditation as one possible way to train conscious and subconscious minds to connect to each other. His theory of saying “it just hit me” actually means the subconscious mind sent information to the conscious mind, which I remember to have experienced several times myself in recent times – I’m in a calm state without thinking anything and suddenly a great idea strikes me, it’s fascinating!

Be very open minded and don’t expect yourself or anyone else to be 100% right in any particular topic. In case of a disagreement ask questions and let others question your views. Making mistakes should be allowed but repeating the same mistakes should be not.

I now have a much better understanding of Ray Dalio’s mindset and principles, how he has successfully applied the idea meritocracy to bring Bridgewater Associates 40 years since inception to where it is today, having staff of 1500 people and $140 billion of AUM (March 2021). In the last chapter he shares tools used at Bridgewater to apply and monitor these principles.

These are my thoughts about the content. Just like the author suggests in the introduction of this book that every reader should read between the lines and try to understand processes in the background, choices he made and the consequences to it, I also encourage everyone to read the book to find out what the points were that caught your own attention.