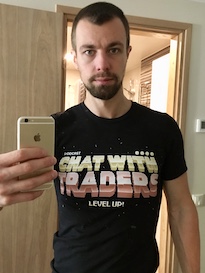 I started listening to the podcast Chat With Traders in the fall of 2018. It is run by Aaron Fifield from Australia. I have now finished all the 185 episodes.

It is kind of a modern version of the Market Wizards book series. Aaron interviews different traders who talk about their start, trading experience, methods and resources. Obviously nobody gives away their exact edge on a public podcast, but the knowledge and amount of insights is huge. The most well-known traders featured on the podcast are in my opinion Nick Radge, Steve Burns, Adam Grimes, Jack Schwager, Tom Basso, Peter Brandt, Kevin Davey, Linda Raschke, Brett Steenbarger, Jerry Parker, John Carter, Raoul Pal, Edward Thorp, Larry Hite. But there are also many less known providing valuable thoughts.

I’ve been enjoying listening to so many different traders to understand what kind of possibilities there even are in the markets. If you read about and listen to so many different opinions, you can actually start seeing some patterns among professional traders and make own conclusions out of it. At first I picked episodes by titles and names, however later listened to all of them and realized, some that felt irrelevant by title actually turned out to be very good insights.

The podcast has been part of my lifestyle as also is trading. At first I listened to three podcasts in a week, each time I was in the gym working out. You don’t want to overload yourself with information, instead listen to an episode at a time to let it digest in your mind. Later on I’ve been speeding up the process by listening to 1-2 episodes a day, after waking up in the morning and while walking / running / working out whatever activity I’m doing that day. Since being much more in the topics and grasping stuff better, I’m able to listen to more of it in a week.

Thumbs up to Aaron and I hope he continues doing the podcast for many years to come!