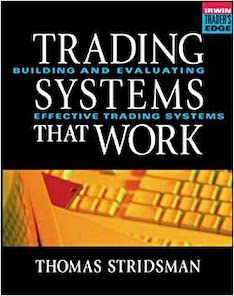 At first I was a bit skeptical taking this book to hand because it was published 20 years ago, therefore the title sounds like a book about aged trading strategies that probably don’t work anymore. But since few traders had recommended to read this book I gave it a shot. After reading the introduction, I understood that fortunately it’s not just about specific strategies, but it is a book on how to put together one’s very own trading system which consists of the strategy, money management, selection of markets etc. This sounds something similar to the book by Van K. Tharp which I recently reviewed in my blog. I like the approach that trading is not about single self-isolated decisions but more about managing a portfolio of holdings. However, the author doesn’t consider himself a trader, but is actually an analyst.

The author starts the book with comparing TradeStation and MetaStock – the two best software at the time for testing and working on one’s trading system. He goes on with examples using TradeStation. Stridsman first writes about measuring total net profit, maximum intraday drawdown, account size required and return on account. He brings up some good points on what to use to measure results. Looking at dollar profits for two separate trades can be deceptive as the magnitude of the move and time perspective can influence a lot more in the long run. When measuring a historical drawdown, the percentage move should be put to current market value. He makes use of the profit factor, something I have also been using myself and written about previously in my blog.

One of his points on time perspective is an interesting one I haven’t seen elsewhere – you should spend as little time in the market as necessary to catch as many and as large favorable moves as possible, because the more time spent the more risk is assumed. At first, it didn’t make much sense to me because I’d be more in the letting-profits-run camp, but he makes a great point with an example of trading the S&P 500 futures contract compared to buy-and-hold strategy with market exposure 100% of the time. You shouldn’t just look at the total amount earned but also consider time as a limited resource, especially since the future is unknown. Your worst drawdown is always still to come.

A good point on time perspective – what is long-term and what is short-term? It can differ greatly for one and another, it could depend on the type of strategy, and instead of considering the chart timeframe one could measure it in bars. He is more flexible on defining the in-sample and out-of-sample data to build robustness than other materials I have studied on this topic. Back in the days there was probably less noise created by high-frequency and electronic trading, which could be one of the reasons why quants are more strict on the matter today. Some interesting philosophy on a good working system vs a profitable system – according to Stridsman, there’s a difference.

Stridsman creates several trading systems together with the code for TradeStation. There are short-term and long-term systems using moving averages, Bollinger bands and other indicators. He shows how to measure performance using metrics like win rate, profit factor, average win / loss, standard deviation etc. I’m not exactly aware of the EasyLanguage code in TradeStation today, but the overall theory seems much like in the more modern materials.

The author backtests his systems on different markets like stocks, currencies, commodities, bonds to make sure the system is robust – this is emphasized throughout the book. Another point reminded to readers multiple times is to measure systems in percentages rather than dollar amounts to put them in today’s markets’ context.

It is easy to enter the market, but the overall success of consistently making money will be decided by the exits. There is a thorough chapter on drawdowns and classification for it which I had never seen before: end trade drawdown (ETD), closed trade drawdown (CTD), start trade drawdown (STD), overall drawdown number (TED). Then there is a chapter on how to use John Sweeney’s maximum adverse (MAE) and maximum favorable excursion (MFE) techniques to spot unique characteristics of trades that separate winners from losers. An interesting part is about working with random entries for short-term trading systems. This part of the book has become more mathematical and there is much analysis done using kurtosis and skew. The analysis is run on the example trading systems created by Stridsman earlier in the book.

Thomas brings up the indicator-piling trap that so many new traders fall into. You do not need ten different indicators actually using same inputs stacked on top of each other to make it look better. The next question to ask oneself is whether following the longer-term trend of the market makes a good filter. This part ends with a philosophical chapter on what makes a trend. He describes the shaping of modern financial markets since the 1950s with examples of many classical theories and practical examples of the market behavior up to the “current” time (at the time of writing this book in 1999).

When starting off with money management, Stridsman’s pointers align with classical suggestions I have also read elsewhere, that is to keep risk size the same and think in fractions or percentages rather than dollar amounts. He shows how to calculate holding period return (HPR) and terminal wealth relative (TWR), the latter being compounded HPR for all trades. The author goes in-depth with the popular money management system “optimal f” created by Ralph Vince. With his term “optisizing” that comes from optimizing the sizing, Stridsman emphasizes the importance of well researched position sizing that forms a trading system into a strategy.

This is not an easy book for a beginner. It is a very practical book with examples and step-by-step guidance for someone who’s interested in systematic trading. Even though the software-related coding in TradeStation and Excel has obviously improved in two decades, most of the content about markets and system trading principles in this book have stood the test of time. It’s actually interesting to see examples from the ’80s-’90s for a change, as all the newer books show more recent times. For an aspiring trader who already knows something about systematic trading, this book can be helpful to generate new ideas.