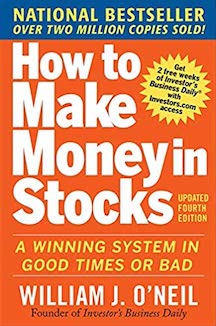 The book was first published in 1988 but has been revised and updated several times since then. This is the fourth edition and was published in 2009. William O’Neil is a name I’ve seen and heard throughout the trading industry. He’s been involved in the markets since 1958. Many have suggested to read the book and I’ve had the opportunity to chat with a trader from California in person who used to work for O’Neil. Trading books often lack of chart examples but this one has lots of technical examples to get a feel for O’Neil’s thought process. I’ll give a brief overview of the book and a conclusion in the end whether I’d recommend it to others.

The introduction has already outlined the author’s main principles of trading, which focus on a company’s profit growth, price and volume action, but also many other valuable lessons O’Neil has experienced during his long career. The first chapter shows 100 charts of winning stocks from 1880s to the end of 2008, an educative exercise to train the eye to spot such patterns. The charts share a very similar buying setup I can sum up in a sentence: price breaks out to a new high on growing volume from a narrow sideways base. The author refers to the building of a base as the “cup and handle” pattern. The defining of a “climax top” to exit into strength is something more difficult for a beginner and needs the intuition of an experienced professional in my opinion, because I see some hindsight bias there – some similar tops are being bought as breakouts and at other times sold into a climax, which adds discretion to the process. The examples don’t stop at showing winners only, there are several charts with a thorough explanation how to avoid wide and loose patterns that are more prone to failure.

Fundamentals together with technicals

O’Neil’s first insight into picking winning stocks is about growing quarterly earnings per share. There are good examples and explanations for his methodology how to best use it to find big gainers. The next one is to look for big annual earnings growth. The author explains why most investors today use the P/E ratio wrong by looking to buy low and sell high P/E ratio stocks. This is actually something I’ve learned from other traders, too. O’Neil encourages to go against conventional investors and buy new highs if they break out from correct bases on increased volume. He shares some points about his research showing why it’s better to buy new highs rather than new lows.

Watching supply and demand gets some interesting thoughts here. The author suggests small caps are usually giving better performance and bigger large cap stocks being often sluggish and too big to move. I think this might have to do something with the time of writing (2009) because the last decade has shown how big tech companies can keep growing bigger and bigger. Of course, small caps in general still have more volatile moves but it comes with the risk of sharp down moves. O’Neil gives trading volume an important role for revealing possible institutional accumulation that I have also been practicing myself. The way he expresses supply and demand being more important in stock trading than the opinions of all the analysts on Wall Street, what school they went to, what degrees they got and how high their IQ is… so true.

I’m having a hard time believing in the author’s subjective way of market timing to nail tops and bottoms using discretion. When I look at the example charts I see very similar price and volume action somewhere else on the chart that is not part of the example and didn’t materialize the same way. Furthermore, O’Neil suggests zooming into hourly charts to better time the market which doesn’t make sense to me. I’m not saying a trader can’t time the market, in fact I think one can but it’s extremely hard to do on intraday data with discretion. Maybe it’s just the quant speaking inside of me. However, I do agree with him that the overbought and oversold indicators can often be costly misleading when the market starts to trend.

O’Neil had had 50 years of experience in the markets while writing the book in 2008. His facts about bear markets taking time to develop and having at least three legs of down movement are interesting to read today after we’ve had two consecutive bear moves in December 2018 and March 2020 followed by powerful V-shape recoveries. I guess the markets do change.

He continues with this book to write about selling the stocks. He goes with the old adage of trading that is to cut losses and let profits run. O’Neil lays out many good stories from the past to make his point. I oppose to one of his selling rules to cut losses at a fixed percentage – something I don’t do myself because every stock behaves differently and the same percentage move can look very different on the chart of AAPL compared to TSLA, for example. I do like the man’s philosophy that all stocks are bad unless they go up in price. However, he is in the “take profits into strength” camp while I have learned to let profits really run and hold longs more into signs of weakness.

There is much more in the book about diversification, industry groups, money management, using margin, position sizing, shorting stocks. The author also gives his own opinion about IPOs, options, futures, warrants, convertible bonds, dividends, day-trading stocks. I went through his list of 21 common mistakes most investors and traders make and can say there wasn’t anything new I hadn’t already learned before, so that should be a good sign.

Overall, I think it is a very comprehensive and educative book on stock trading. Even though I don’t agree on everything O’Neil writes just because his style is discretionary and I am more a quantitative trader myself, I still find it a very good book to recommend to others. Content of the books meant for beginning traders has started to overlap for me because I have read tens of different books on the topic, but this one covers a lot for someone who hasn’t read that many yet.

How to Make Money in Stocks by William J. O’Neil book link